Another will appear in the Guardian Ape's Burrow after killing Headless Ape and entering the Hidden Forest, making the Sculptor's Idol in the cave unavailable.

Lastly, he's encountered in the Fountainhead Palace at the foot of a waterfall. Some Palace Dogs are also found near the end of the stream.

Since the Shichimen Warrior is an apparition-type enemy, Divine Confetti are mandatory to deal any substantial damage to him and, in this fight, they also allow the katana to vanquish the various spells of this mini-boss.

This mini-boss mostly fight by firing Terror-inducing projectiles to the player, therefore it's highly recommended to carry Pacifying Agents or a Mottled Purple Gourd during the fight and even consume one before starting it.

The Shichimen Warrior is prone to jump high in the air after certain attacks, as such it's best to buy the Anti-Air Deathblow Text from Blackhat Badger, since its ability allows Wolf to instantly remove a Vitality bar from the mini-boss, if he attacks the Shichimen Warrior while he's floating.

Because Divine Confetti are rare to come by early in the game, they are also needed for the Headless and this mini-boss is almost harmless at close range, using Ako's Sugar or Yashariku's Sugar can be useful to save on them.

Firecrackers can stun him for a short while, but, if used at the start of the fight in particular, they'll trigger the Shichimen Warrior to jump after the stagger, opening himself up to an easy Anti-Air Deathblow. The Phoenix's Lilac Umbrella can guard Wolf from any damage and Terror build-up inflicted by his magic. The Malcontent, just like against any other apparition-type enemy, can stun him up to three times. The Lazulite Flame Vent can be used as a flamethrower from a distance to safely kill the Shichimen Warrior without him having any way to counter-attack, as the Prosthetic Tool will nullify any in-coming spell.

The battle revolves mostly around avoiding the numerous projectiles of the Shichimen Warrior, while closing on him to begin attacking. From time to time, he'll use his Staff Swing attack, but it's more common for him to just deflect an attack and then disappear, to then reappear on the opposing side of the arena and use his Unseen Soul Stream move.

The Shichimen Warrior will always start the fight with his Conjuring move, if not interrupted. If he's staggered while casting the attack, the Terror-inflicting aura surrounding him will still be in effect, despite appearing invisible. If the mini-boss finishes his attack, he'll almost always follow it up with Floating.

While he's not vulnerable to any stealth deathblow in the Bottomless Hole and Guardian Ape's Burrow, it's possible to plunge deathblow the Shichimen Warrior in the Fountainhead Palace with the correct angle. 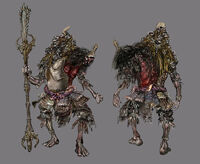