Owl (梟) is a master shinobi and the mentor of Wolf. He took him under his wing after finding the young boy looting a battlefield. The man was ruthless with Wolf, appointing Lady Butterfly to train him in Usui's forest of mist and illusions, for that was the only way he could call the boy his own son. Through these hardships, Wolf too became a master shinobi and Owl entrusted him with the duty of protecting a young lord named Kuro, heir to the sacred Dragon's Blood.

Progression #1 (The Master is Absolute)

Talk to Owl to receive the Hidden Temple Key which allows Wolf to confront Lady Butterfly. Interacting with his corpse will have Sekiro repeat the instructions his father gave him to reach the Main Hall.

Progression #2 (The Father is Absolute)

After Wolf acquires the Lotus of the Palace, the Mortal Blade and the Shelter Stone, the Central Forces will launch a full scale assault on Ashina Castle. Atop the building, Owl will be found trying to persuade Kuro to join him. Seduced by the Dragon's Heritage, Owl commands Wolf to obey the Iron Code and abandon Kuro.

After receiving the Father's Bell Charm (see its page for more in-depth informations) from Emma, Wolf will be able to visit the Hirata Estate memory under a new perspective.

After defeating Juzou the Drunkard a second time, Wolf will have a last face off with Owl (Father) for the Aromatic Flower. 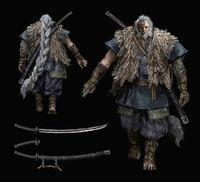