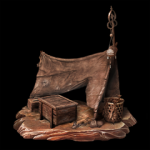 The Memorial Mob (供養衆, The Many of the Memorial Service) is a group of merchants who sell the items they pillaged from corpses as offerings to the dead.

According to Shintoism, death is a cause of pollution and the people who thrive in it are the most "impure" of all, as their souls are tarnished by its filthiness.

They're found throughout all of Ashina.

Meeting them and purchasing certain items from these merchants are necessary steps to unlock the following Trophies: