He's located inside the shrine in the Gun Fort of the Sunken Valley.

As the Sixth Prayer Necklace states, among Centipedes their leaders are called "long-arm" due to their claws.

The fight is identical to that of the other Long-arm Centipede, but without any minion and in a more cramped room, as such performing consecutive deflections on the first four attacks of his Flurry combo, then on the latter five and ending with a deflection against his last hit, before jump-kicking his Perilous Grip will make short work of this Mini-Boss.

It's best to Jump-kick backward, since he may start executing his Quick Slash combo while Wolf is still vulnerable in mid-air.

The Centipede will deflect most attacks thrown at him, so focusing on filling up his Posture bar is more important than attempting to deplete his Vitality.

Gokan's Sugar is recommended to not risk getting Posture broken mid-combo.

Like against the Corrupted Monk, the stagger of Shinobi Firecracker and Fistful of Ash doesn't have any cooldown on this Mini-Boss. The Mist Raven can be used to get behind him, to find a safe opportunity to use other Prosthetic Tools like the Flame Vent and the Sabimaru. 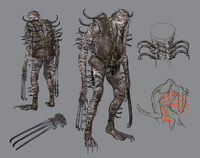