He appears in the Great Serpent Shrine of Ashina Castle, mourning over the corpse of his brother Masanari, killed by the Tengu of Ashina.

He's also found at the end of the Bamboo Thicket Slope in the altered memory of Hirata Estate.

Before engaging the actual Mini-Boss, it's best to get rid of the dogs outside the shrine, unless one plans to turn them against their master with the Finger Whistle.

Since some of the moves of this Lone Shadow deal high Poison build-up, it's recommended to carry Antidote Powder.

Firecrackers can stun this Mini-Boss for a short while, creating a valuable opening to heal safely. The Flame Vent will damage his Vitality greatly and can prevent his Posture from regenerating through Burn.

It's possible to start off the fight with a stealth deathblow by simply taking the right from the staircase leading up to him and following the wall to end up behind his back.

If the room appears too cramped, the Mini-Boss can be lured to the courtyard outside.

Before most of his health is depleted, he'll use his Yashariku's Wrath ability to buff his Vitality and Posture damage for the rest of the fight.

After hitting him twice, it's best to be prepared to deflect his counter-offensive.

His Kick and Pirouette Kick can be avoided by crouching under his leg.

If attacked early, he can be stunned him out of all his Perilous combos.

There's enough time to punish him at the end of every combo, as he never chains two together.

In the Hirata Estate, his Shinobi Dog Whistle move is heavily telegraphed by him dashing backward, calling for an opportunity to either interrupt him with Shurikens or the Flame Vent or to prepare the Finger Whistle to turn his dogs against him.

Since the the borders of the arena are on fire, it's important to be mindful about countering the Perilous Leg Sweep with a proper jump-kick or with a katana swing, based on the surroundings.

To perform a stealth Deathblow on him here, it's necessary to bait him out of the area and hide until he loses sight and starts walking back to his original spot, exposing his back. 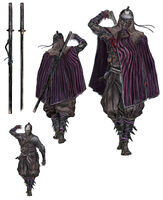