Emma, the Gentle Blade (柔剣エマ), will challenge Wolf to a fight in order to protect Kuro, should the shinobi choose to obey the Iron Code at the request of Owl.

Mikiri Counter her Perilous Thrust or jump onto her while she's performing her Perilous Sweep to deal a large amount of Posture damage to her. She has fairly low posture but attacks swiftly. She uses her Perilous Grab often, which can be avoided by running away and then counter-attacking. Wear down her vitality by circling around her and dodging as she attacks, hitting her once or twice each time. Many of her attacks have short windup, making her learning curve steep. Striking twice before preparing to block or parry can often lead to a long chain of her blocking your attacks, followed by parrying her strikes, and then repeating, that can fill her posture bar halfway even when she is undamaged. If Wolf plays aggressively, allows for little time to regain her posture and near-perfectly parries all her undodgeable strikes, it is possible to break her posture around the time she reaches half HP.

If there is a long distance between Wolf and Emma, she may change her walking style very slightly, moving slightly quicker. When this happens, she will not perform her usual heal punish moves, allowing Wolf a chance to heal or use items. While not perfectly, many of the general patterns of battle with Emma reflect those of Isshin, such as the back and forth block trading leading to easily building the posture bar, power walking preventing them from using heal punishing attacks, or their tendency to strike quickly but only two or three times with each combo instead of the long combos of other major bosses, so she can be considered a form of warm up for the fight against Isshin.

Once Emma falls, Isshin Ashina (葦名一心) steps in to take her place.

Isshin Ashina studied many forms of combat, and Wolf must employ various tactics to match his ability.

In Phase 1, he will always begin by closing the distance with Cloud Walk. Ichimonji has a long windup and can easily be dodged to the side, opening Isshin up for a counter attack. His Slice Combo is swift and should be avoided, though attacking is possible when it finishes. It is difficult to damage him during most of his standard attack combos, however striking him will still reduce posture so try to avoid attacking more than once or twice. The best times to deal health damage are during his long windups for Vertical Slice, after dodging Iaijutsu, or after a successful parry from his Foresight counter hit.

Similar to Emma, if Wolf needs to heal or use an item, making distance and waiting for Isshin to shift into his power walking animation will prevent him from using his standard heal punish. However if Wolf attempts to jump to make distance, he may dash alongside Wolf.

In Phase 2, Isshin imbues his attacks with the power of fire. For this reason, it may be useful to equip Dousing Powder or the Withered Red Gourd. The Flame River can be easily avoided by dodging to the side. The Fan of Flames attack can be interrupted with the Loaded Axe, but is safer to avoid altogether. Dodging to his left, your right, is ideal for dodging the Fan of Flames attack, as it is angled so that dodging to his right, your left, will cause you to be hit but not vice versa.

There are safe spots scattered among the floor with each different encounters, therefore quickly retreat to the one furthest away from Isshin for maximum protection during his Chasing Flame and One Mind. The fire pillars strike from below, meaning Suzaku's lotus will not protect you. However once a safe location is found from the fire pillars, deploying the Loaded Umbrella protects you from the entire One Mind combo, and allows for an easy follow up with the Projected Force upgrade, make sure to also wait for the follow up slash before striking.

Despite the extremely fast pace of this fight, Isshin's attacks either come out at regular intervals making perfect parrying easier, or he performs long wind ups allowing for an easy dodge and punish.

Emma with a katana 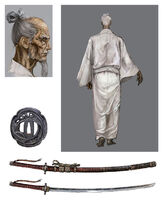