Great Shinobi - Owl (大忍び 梟) is met again atop the Ashina Castle roof, attempting to convince Kuro to join him. Kuro refuses, understanding that he too has been seduced by the Dragon's Heritage. When Wolf confronts his foster father, Owl will inform him that he faked his own death and now seeks the power of the Divine Heir's blood, ordering his son to respect the Iron Code and abandon his master. If Wolf refuses, he expresses a deep remorse and, after pretending to appear defeated, draws his sword on Wolf as he has his back turned.

Before engaging the Great Shinobi in battle, ready an Antidote Powder in case the Owl's poison attacks build up in Phase 2. Because most of the Owl's attacks can heavily damage Posture, having a Gokan's Spiritfall, Gokan's Sugar or Persimmon ready helps. Owl is also susceptible to Shinobi Firecracker, but beware that he can also perform that attack. The firecracker is especially useful to create a window to use the Healing Gourd. Since his posture will replenish quickly if his Vitality isn't harmed, mixing the Flame Vent (especially its upgraded modes, which can charge their attacks) and Oil can both damage his health massively and prevent Posture regeneration if they inflict Burn on the boss. The Loaded Axe can easily fill up his Posture meter, but it's only safe to use after Owl performs a heavy attack.

Do not attempt any thrusting attack or using the Loaded Spear in front of Owl or unless he's recovering from his heavier attacks, this is because he can easily perform a Mikiri Counter on these attacks and follow up with powerful finishers that would often kill Sekiro.

Because his attacks are so singular, a general tactic to whittle away his health is to strafe around him from a safe distance until an opening presents itself for attack. For the jumping somersault attack, dodge to the side or in front, and as soon as Owl lands he can be attacked a couple times before he attacks again, requiring a block. When he charges forward to kick, dodge backwards to avoid it, then rush in for a couple quick hits.

When Owl pauses to throw a small green orb into the air, it's best to run away as being caught in its area of effect will prevent healing for a short period of time, but it's also possible to punish this move by unlocking and dashing behind him, who'll now be completely defenseless until he turns around to face the player.

Beware of his poisonous jump attack in Phase 2, and that the area where the poison bombs fall should be avoided for a short while as to not be inflicted with Poison build-up. He also often uses this attack when his Posture meter is halfway full to perform his Recovery move, so it's adviced to always have Shurikens ready to interrupt him from a safe distance.

When he drops a smoke bomb to obscure his next move, it is best to stand still and hold the block button rather than running away as he usually follows it up with a running slash. 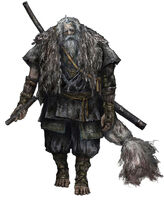