Genichiro Ashina (葦名弦一郎, Ashina Genichiro), adopted after the death of his peasant mother by the Ashina, is the current leader of the Ashina Clan. Worried the strength of his army won't be enough to ward off the raid of the troops of the Interior Ministry, Genichiro seeks to abduct Kuro to obtain The Divine Heir's gift of immortality, planning to use it to save his beloved country and his clan.

It is advised to fight him near the bridge on the dirt road as to not be obscured by the tall grass. Deflect or dodge his attacks and look for openings. The best opening is when he jumps and he suffers a lot of Posture damage when jumped on during his Perilous Sweep attack. If Sekiro stays close to him, he will not initiate his ranged attacks. Alternatively, one can approach more passively and guard for the entire fight. Eventually, Genichiro will resort to the highly telegraphed Perilous Grab, which leaves him vulnerable after the attack.

Genichiro of the Ashina Clan

Genichiro in the Prologue 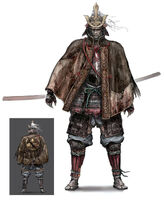