Tamura Shuzen (田村主膳), referred to as "General Tamura" (敵将田村, Tekishō Tamura) in the introductory cinematic, was a general in the Sengoku Era. He used to wield a cross-bladed spear.

He fought against the Ashina to supress their rebellion, but was ultimately killed by Isshin Ashina on the battlefield.

After his victory, Isshin kept Tamura's great spear as a trophy of his victory. Later, he rewarded it to Gyoubu Oniwa for his great strength after recruiting him. When the young Isshin comes back to life to grant his adopted grandson Genichiro's last wish, he uses this spear in battle, alongside his sword and gun. 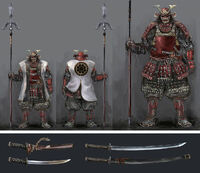