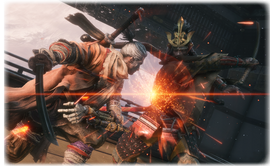 Upon completing any ending for the first time during a playthrough, Gauntlet of Strength will become available at any Sculptor's Idol.

A Gauntlet of Strength is a series of consecutive battles against the memories of previously defeated bosses.

During these fights, Wolf's Attack Power is set automatically and any item used is reset at the end of the Gauntlet.

Defeating bosses here won't award Sekiro with any Experience or Sen or, with the exception of the final boss of every Gauntlet, Memory.

After every boss, except the last one, is defeated a Sculptor's Idol will appear with the following options:

Dying or choosing to "Quit battle" or "Quit game" will kick Wolf out of the Gauntlet, deleting any progress, and back to the last Sculptor's Idol he interacted with.

There are four Gauntlets of Strength: