The Demon of Hatred (怨嗟の鬼, Oni of Deeply-held Resentment) is an optional Boss with three Deathblow counters found at the Ashina Castle Gate, when the final invasion of the Central Forces hits Ashina.

He's the vessel for the flames of hatred of a man who failed to become Shura. The one-armed demon prowls the battlefield, consumed by flames of deepest resentment. As Wolf's about to kill him, a voice thanks him for putting an end to the rampage. That man was bound stubbornly to this world, and it wasn't until he became a demon that he was able to depart for the next.

In order to access his closed off arena, Wolf must reach the Underbridge Valley from the Old Grave of Ashina Castle and traverse Ashina Outskirts until the Gate Path: upon commuting with a Sculptor's Idol, he will be sent to the Flames of Hatred Sculptor's Idol.

Suzaku's Lotus Umbrella is very useful for this fight, as it shields against most of the Demon's Burn-inflicting attacks, such as the Shower of Fire and Eruption, and can even counter them for Vitality damage with the Projected Force Combat Art. As an apparition-type enemy, the Demon is vulnerable to the Divine Confetti buff and Malcontent can be used to stun him up to three times, while Lazulite Shuriken and Lazulite Sacred Flame can damage his health severely.

The Withered Red Gourd, Dousing Powder, and Ministry Dousing Powder are recommended, as any attacks from his demonic arm will cause fire buildup.

Due to most of his moves being unable to be canceled when struck, outside of a full stagger, striking two times before preparing to block or dodge is ideal. Occasionally a third or more hits might be added, but until his move set is learned properly, two strikes is the safest option.

Due to the tracking his attacks have, Deflecting, while it won't deal high Posture damage, may prove to be a valuable alternative to Side-Stepping. As his left arm is the source of most of his long distance attacks, running towards him along the opposite side from his arm gives more time for attacks to connect, allowing for more time to dodge or block.

After dodging to the right through the first fiery attack of his Combo, sticking close to his left leg is enough to avoid the second hit completely. While he appears to then stomp with his left leg after the second swing, this is not an attack and will deal no damage, so it can be punished.

He often follows his Charge with Shower of Fire, so if you leap directly backwards to dodge Charge, sprinting towards him as fast as possible allows Wolf to often escape under the fireballs. If you leap sideways or forwards to dodge, the fireballs will often land before Wolf can get past, so backing off and waiting is preferred.

When he leaps into the air to perform Eruption, begin to move backwards when he reaches the peak of his jump, then leap shortly before he lands and grapple. Using a grapple strike will often miss the second swing, however if the attack is delayed until when Wolf is about to touch the Demon, the second strike will usually connect. This move can be blocked by the Umbrella, but attempting to counter-attack too early will make Wolf vulnerable to the knock-back effect.

Deflecting his Harite will stun him for a brief second, but if done too close to him it'll expose Sekiro to Flickering Flame

It's risky to attempt to punish his Head Slam early, as there's no way to tell when he'll do it one or three times.

Dodging to your right of his single heavy stomp attack is extremely risky, dodging left is safer. Blocking the attack entirely is safer, but prevents Wolf from punishing.

If Wolf is within attacking range, most of his non-perilous attacks can be dodge by sprinting around him.

He can't be damaged through his transition to Phase Two and he'll conclude it with a harmless knock-back. This makes for a perfect moment to heal and use Sugars/Spiritfalls before his second phase begins.

Run to either side once he initiates the Flashfire attack, which he telegraphs by leaning to his right and slamming his left arm onto the ground, jump right before sends out the flames, then grapple to him. While being farther away allows for more time to see the firewave coming towards you, it spreads out as it travels making it more dangerous if you can't successfully grapple to him.

Running to the side can also be applied against his new Burning Wrath attack, but be careful not to get too close to the Demon as it'll make it harder to avoid his homing projectiles. After several projectiles, there is a very slight pause in his head's circular motion, this is a good time to begin closing in as only 4-5 projectiles are left in the attack.

In Phase 3, run away as soon as he starts sweeping the ground or Wolf will be trapped in a much smaller fighting area. Since the Demon is completely vulnerable all the way through his Inferno attack, one can choose to take advantage of this by staying in front of him, jumping above the first sweep and then dashing toward him through the second to avoid any damage.

While in the fire ring, the Demon will often use his Charge, following it up with a Blazing Trail that can be hard to detect, because of the flames hiding the Perilous Attack kanji.

It is worth saving all three uses of Malcontent for his final phase. As he often attempts to begin the phase with Inferno, attacking him until he has nearly finished his animation, and then using Malcontent, attacking, and then reusing Malcontent right before he recovers for all three uses allows for over 60% of his health and posture to be damage, with even more being dealt if a Sugar or Spiritfall is used beforehand.

To unlock Wolf's dialogues during the bossfight, the player needs to complete the following steps before the Interior Ministry attacks Ashina for the first time:

Once the attack on Ashina begins, the player needs to complete the following steps: 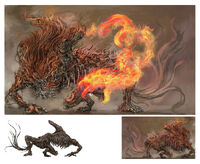