Blackhat Badger (黒笠のムジナ) is a merchant hiding inside an house near the Old Grave of Ashina Castle.

He will later appear in Senpou Temple, where he'll employ Wolf's help to fly a kite so that he could cross the valley. He'll be then found in the Sunken Valley Cavern, mourning over the tomb of his child.

He will be last found back in Ashina Castle, after the final invasion of the Central Forces: fatally wounded while defending a kid from the invaders, he'll gift Sekiro his precious Mibu Pilgrimage Balloon.

Climb to the top of the castle and defeat Genichiro.

Exhaust Kuro's dialogues until he'll task Sekiro with interrogating Isshin about the Mortal Blade and proceed as requested.

Interact with the Illusive Hall Bell and fight the Folding Screen Monkeys to obtain the Puppeteer Ninjutsu.

Equip the Puppeteer Ninjutsu and perform a Backstab Deathblow on the Assassin guarding the kite machinery to take control of him: he'll run up to the machinery and fly the kite higher.

Grapple onto the kite to cross the valley and reach the Sunken Valley Cavern.

After defeating the Divine Dragon, Badger will be found nearly dead before the gate to the bridge where the Ashina Soldiers and Central Force Agents are fighting: speak to him and then collect the Mibu Pilgrimage Balloon from his corpse.

Upon defeating the Corrupted Monk, the Dragon's Tally Board she drops will unlock new items at every merchant.

Complete Anayama's questline (see his page for in depth info) to acquire the Promissory Note, which will discount by 10% the cost of every item sold by merchants. 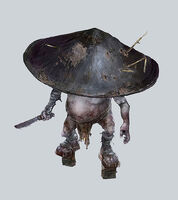