Soldiers first encountered in the prologue, patrolling in the Ashina Outskirts and throughout Ashina Castle.

Their attacks are rather slow and their posture can be exhausted by a few quick strikes, opening them up for a Deathblow.

Simply rapidly pressing the attack button is enough to defeat them.

A spear-bearing Ashina soldier, encountered first to the left on a platform nearby the Chained Ogre in Ashina Outskirts.

His attacks can be deflected but it is safer to jump on him to deal posture damage. He can be killed in a few hits.

The one that is fought near the Chained Ogre in the Ashina Outskirts will start patrolling towards the stairs once Wolf approaches the Ogre, so it is advised to pull the mini-boss down to the bottom of the stairway, or to finish the spear-bearer first, as the Ogre is breaking free of its shackles. 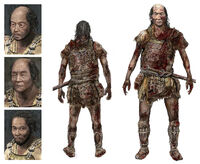 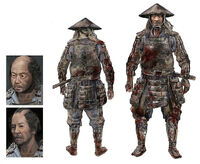