He mostly fights with the Ashina Cross.

It's possible to remove one of his healthbar by consuming a Gachiin's Sugar and hugging the left wall while crouched: Jinsuke won't automatically aggro and will become vulnerable to a Stealth Deathblow.

Saze receives conspicuous amount of Posture damage from getting his Ashina Cross deflected: the Gokan's Sugar found right outside the Dojo or Ungo's Sugar can help practicing against this Mini-Boss without the risk of dying from a failed attempt at parrying him.

Given his more generous parry frames, the Loaded Umbrella is highly recommended for deflecting the Ashina Cross'.

If attacked after a successful deflection, he'll mostly deflect back and then throw his Perilous Sweep.

Dodging to the left is enough to avoid and punish his Ashina Cross, which creates an opening to damage his Vitality with the Flame Vent or his Posture with the Loaded Axe.

This Mini-Boss is also extremely susceptible to the Poison of the Sabimaru.

Whirlwind Slash can block Jinsuke in an infinite loop of deflecting and attempint to counter with his Perilous Sweep without being fast enough to avoid getting staggered by another immediate Whirlwind Slash.

Practicing spacing, it's possible to out-maneuver Saze with his own move, the Ashina Cross, as this Combat Art close a lot of distance in a split second.

Both Shadowrush and Shadowfall can be employed to safely kill him from a distance, since he won't be able to counter the first thrust, after which it's possible to rapidly create space from him by jump-kicking away. 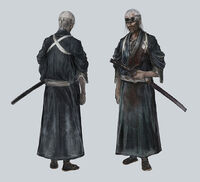